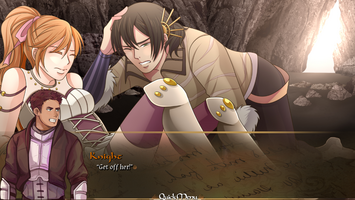 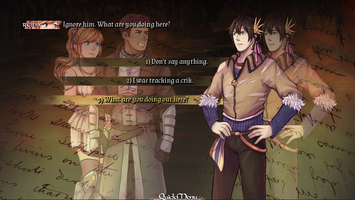 Good morning! :) How is everyone doing? The game is progressing in all fields. The artist taking over the CG has completed nearly all of the new ones for Chapter 1, as you can see in the new preview image upon. In coding I've also found my happy medium for the choices menu. Still the original functions of being able to press keys 1-9 to make a choice, and Eir's expression changing when you hover over an option. The new feature includes animations on the bars when they first appear and Eir's sprite is now forward on the screen. It looks pretty sharp in game.

A patch/update will be out for the game sometime around the end of this month. This will be the final version of the demo that will remain free to download. Progressing through the whole story has gone pretty smoothly for the writing as well as implementing it in the coding. I'm not going to make further changes to the GUI or overall feel to the game now. That said our sprites for the second chapter should be here before the end of December meanings chapter 2 will be here before the new year.

I'll be honest with you. When making a VN art is the biggest resource that takes the most time. Artist get tired, people burn out, and sometimes even leave before the end. Sadly, the later is what I've experienced more often than not. The group of artist, though few, are really talented and I love working with them. I just bring this to you to ask for your understanding.

That said, I've received a lot of emails asking about voice acting for this game. I've done voice acting in games before, not released here, and while I enjoy the experience of working with VA's at this time it's a soft no for this project. I'm on the fence, but it's not a hard no just yet. If you're interested in being a part of this project I'll let everyone know my decision by the end of the month.

Have a great November everyone and cross your fingers for the health of our artist. As always feel free to reach out to me either here or on https://casting-dreams.tumblr.com under an ASK ME is the easiest way to get in contact with me. Have a good one, we'll see you at the end of the month with the update.

A mutilated king, a throne that was never meant to be hers, & a man who is the last of his kind.